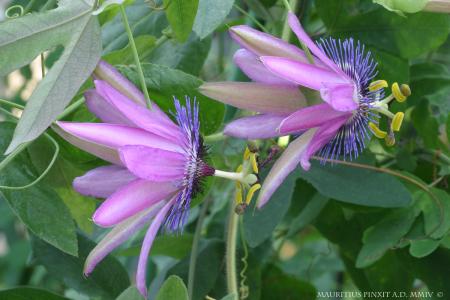 From the amethyst color of the flowers.

It is an ancient hybrid with an unknown creator and still very popular.

It seems that John Vanderplank was the first to insert it in his book 'Passion Flowers' (Cassel 1991) thus becoming the author of its name. However, another scholar, Patrick Worley (California), had also published it under the name of P. 'Lavender Lady'. The dispute continues.

It is assumed that it contains P. kermesina and P. caerulea, but even this hypothesis is so controversial that still today it is the subject of heated discussions, even on Internet specialist lists.

It is a very beautiful and floriferous passiflora, which has had a notable diffusion thanks to its ease of cultivation and its relative hardiness. In many climatic zones it is in fact an alternative to P. caerulea, precisely because it supports short frosts. I have seen, for example, specimens spend the winter outdoors here, in the Po valley, simply sheltered under an open porch close to a stable.

The appearance of the climber is decidedly exotic and captivating: the large flowers, of an intense amethyst colour, with retroflex petals, grow dense in the dark green vegetation. They are embellished with a short radiated crown of a more vivid colour and marked in the middle by a lighter band. The leaves are trilobate, shiny and slightly leathery. The diameter of the flowers is 10-11 cm and the crown consists of 5 sets of thin filaments. The rules for cultivation are simple, as P. ' Amethyst' is a robust and adaptable plant.

In areas where it is not possible to put it in the ground, it must be cultivated in large pots or in boxes, using rich soil. The supports must also be high and sturdy, as they will soon be covered with a dense barrier of intertwined shoots falling to the ground.

It may occasionally produce fruit containing seeds. In this case it is advisable to sow them, because the plants obtained could be very different from those of the mother plant and therefore reserve interesting and curious surprises.