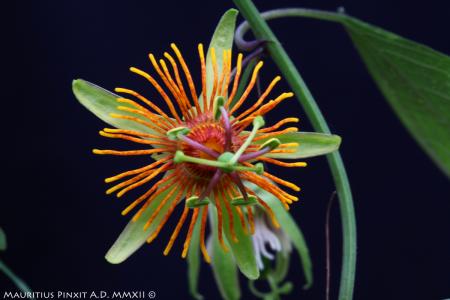 Burst of the sun. For the orange-colored crown shaped like rays of the sun.

The flowers of this hybrid display the warm colours of the sun, so Patrick Worley, the author, could not have thought of a better name. The orange colour of the corona is similar to that of the setting sun; in fact, it reflects the iconography and very symbolism of the solar disk with rays of light radiated into the sky.

However, alongside the originality of its flowers, there is also that of the leaves. They have a bilobate shape, are long and narrow and end with two pointed lobes. The two lateral ribs are crossed on the blade by a lighter, creamy yellow line lying against an intense green background. Small yellow and green leaf glands mark the area between the two ribs.

This hybrid passionflower comes from two parents, P. gilbertiana and P. jorullensis, which have a lot in common with each other. The first has leaves similar in shape to those of P. 'Sunburst', while the second is also bilobate, but with shorter, wider leaves with rounded lobes.

The flowers of both parents are similar in their five-point star shape due to the atrophied petals, and in their colours, with the pale green of the corolla and the yellow and intense orange of the corona predominating.

Another peculiarity to note is the strange smell of the flowers when just opened, strongly reminiscent of mothballs or something similar.

This hybrid is not hardy enough to be grown outdoors except in the really warm areas of our peninsula. In a pot, it is a fascinating plant due to its rich and continuous flowering surrounded by unusually shaped variegated foliage.

Propagation is only possible by cuttings.