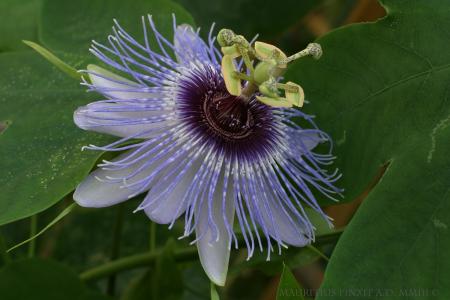 The first flower blossomed on 2 September 1999 on a specimen almost submerged by a forest of other passifloras. I had already noticed a dense shoot of buds and therefore I followed their growth daily until the first flowering. On the morning of September 2nd, I knew, with a fair degree of certainty, that the flower would open that same day ... and that is exactly what happened.

Its colours and its shape did not surprise me too much. I took these characteristics for granted, since I had sensed that the pure white of P. subpeltata would have diluted and tempered, as in the preparation of a watercolour, the deep violet of the flowers of P. amethystina. Nevertheless, there was no lack of emotion and surprise, because it was not foreseeable that the hue would come so decisively close to light blue and blue, rather unusual colours in the Passiflora genus. I checked the label, checked the files where I record all the hybrid fruits, numbering them: it really was the cross-breed that I had prepared two years earlier and sown in a heated box in the winter of the same year.

After a few days, the first bud of another specimen from the same generous batch of seeds opened. Its flowers were the same as those of the first.

The shape of the flower, which has a diameter of about 6-7 cm, is very similar to that of P. amethystina, while the paternal features are recognisable almost only in the leaves. Like its mother, it has slightly retroflex petals, a large crown characterised by a dark centre and light alternating bands suffused with light blue and blue. The filaments, less curled and more robust, perhaps betray the paternal 'blood', which in any case remains decisive for the creation of this singular light blue colouring.

I hope that this new plant is hardier than the mother and that the paternal characteristics, at least in this dowry, have had the upper hand. P. amethystina is in fact delicate (10°C), while P. subpeltata is hardier (2°C for short periods).

I would certainly be proud if this 'angelic' flower could live in the open ground in Liguria and in other mild places of the Italian peninsula.