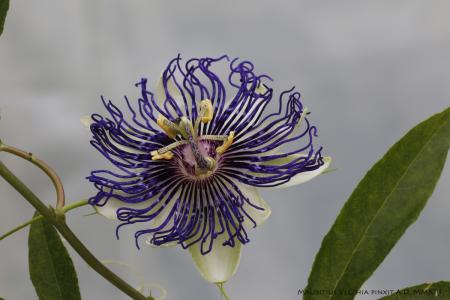 This is one of my first hybrids, and I dedicated it to my wife Clara.

The mother of this hybrid, as for the classic P. x colvillii, is P. incarnata. The pollen, however, was taken from P. caerulea 'Constance Eliott', the albino variety of P. caerulea.

The first flower opened in August 1997, two years after sowing, and it immediately struck me as contrasting the characteristics of its parents' flowers and my expectations. The white corolla is enriched with a sparse intense blue-violet corona, made up of two series of filaments. Unlike the ancient P. x colvillii, there is almost no interruption in the colouring of the filaments which, from the base to the apex, are intense and bright blue-violet. Just a lighter band of some 2-3 mm, situated in the middle of the corona, breaks the colour's uniformity. Furthermore, the filaments are wavy at the ends. This detail gives the flower a whimsical, lively and original appearance.

I could not explain the dark and intense shade of the corona, since neither parent has it (the corona of P. caerulea 'Constance Eliott', is even completely white). I, therefore, believe that, on this occasion, some recessive trait emerged, giving rise to a new and unique flower.

Compared to P. x colvillii, this climber is lighter and more minute. It is less exuberant than the traditional hybrid and also has distinctive leaves, which are light green, trilobate, with narrow, pointed lobes and an undulating blade. It also has red stems, especially if grown in a sunny area.

The hardiness of P. 'Clara' is comparable to that of the parents; however, like the mother, it loses its aerial part in winter.

P. 'Clara' is adaptable to even poor soils and prefers a sunny position, where it shows remarkable decorative qualities due to its generous flowering from June to late September.

Propagation is by cuttings or root suckers.