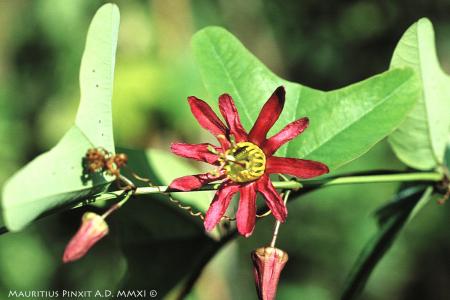 P. biflora (mother) has bilobate, leathery leaves with short, rounded lobes. P. perfoliata (father), on the other hand, has longer, narrower and more pointed lobes. The bilobate leaves of this hybrid have amplified the characteristics common to both parents, as they have large, consistent and very pronounced lobes. Comparing their shape to bat wings is therefore justified.

The parents have left their traces not only in the leaves but also in the flowers. The colour is similar to that of P. perfoliata's flowers, although the sepals and petals are larger.  P. 'Fledermouse' blooms in the characteristic manner of P. biflora, as it bears pairs of flowers at each node along the stem.  P. perfoliata, on the other hand, has flowers in terminal racemes, where the internodes are very short.

The flower (5-6 cm in diameter) is composed of 5 sepals and 5 petals in an antique rose shade. They are similar in shape and equal in length. The corona, composed of a single series of squat filaments, is yellow and more open than that of P. perfoliata, but not as large and intensely coloured as that of P. biflora.

This climber has a robust posture and grows with surprising speed. It blooms equally well and continuously throughout the summer.

It must be grown in a pot of at least 20-25 cm in diameter with high trellises. P. 'Fledermouse', in fact, cannot be confined to small spaces, as its shoots tend to grow straight upwards.

It is not very hardy, withstanding a minimum temperature of about 8°C during the winter period. It can, however, tolerate short periods of a few degrees lower. Nonetheless, it is a sturdy plant that easily withstands stress and cold shocks.

Propagation can only be done with cuttings or offshoots.