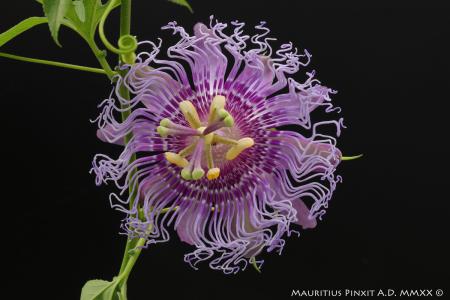 This is a very successful, elegant and spectacular hybrid of passiflora. It comes from two species that have a lot in common and, as if by magic, has taken the best of both: the shape of the flower which is even bigger and richer, the intense, deep violet colour with alternating light bands, the lively curling of the filaments, exceptional fragrance and hardiness, down to -10°C.

There are over 600 species of passiflora and at least 500 hybrids, but although they are almost all beautiful plants, few are suitable for living and decorating the gardens of the Po valley because they cannot withstand frost.

The most widespread species in Italy, Passiflora caerulea, is certainly original as a decorative plant, but its colours are dull and lacking in liveliness. Very few other passifloras can withstand the winter of Italy's northern regions while the more colourful ones can only be grown in areas with a mild climate. The P. 'Incense' redeems the genus, because its large flower has the typical beauty of tropical passifloras, while being easy to cultivate throughout Italy.

The parents of this hybrid are P. incarnata L. and P. cincinnata Mast. The first is hardy (-10°C), fragrant and lively. The second, which provided the pollen, is more delicate, subtropical (+10°C), but has more beautiful and larger flowers.

The flower of P. 'Incense', with a diameter of 12-13 cm, is formed by violet petals and sepals, enriched by a large corona of long filaments arranged in numerous series and conspicuously wavy. They are also violet, but with slightly lighter concentric bands, especially in the centre of the corolla. The leaves are similar to those of P. cincinnata: large and five-lobed; two nectar glands are located about halfway along the petiole, while in P. cincinnata they are at the base of the petiole.

It inherited the herbaceous habit from P. incarnata; in fact, the P. 'Incense', grown outdoors and leaning against fences, completely loses the aerial part in winter and reappears in spring to quickly reach flowering at the beginning of summer. The only precaution necessary in the cold months is to protect the large root system at the base of the plant with peat, chopped bark or straw.

Over the years, new suckers will appear, even distant from the mother plant; P. 'Incense', like P. incarnata and P. 'Fata Confetto', tends to migrate and run silently underground, producing new shoots everywhere. This is a characteristic to exploit for reproducing it easily: just extract them complete with roots and repot them. However, the cutting method gives good results, even if the rooting is slow.

This hybrid is also easily cultivable in pots; indeed, in a restricted environment it blooms with greater abundance and incessantly. The stems and internodes are shorter, and the buds are produced in quick succession. However, it is necessary to provide it with adequate support. I recommend putting 3 or 4 bamboo canes at least 150 cm high in a pyramid form in the 18/20 cm diameter vase. Alternatively, a trellis can also be built in the pot by placing 3 vertical and other horizontal rods up to the top. In this way, a better aesthetic effect is obtained, and flowering is enhanced.

Its location on the terrace is beautiful; placed in large containers, every day from May to October, it can show off dozens and dozens of new exciting and fragrant flowers carried by shoots several metres long.

In areas with a mild climate, P. 'Incense' sometimes behaves like an evergreen, reaches considerable size, and grows and blooms with greater abundance.

It is not particularly prone to diseases, except for attacks by root nematodes and especially by 'mosaic' viruses. In the latter case it is necessary to destroy the infected plants, as there are no remedies, and they would spread the disease. To overcome this problem, John Vanderplank created a hybrid using the same parents and named it P. ' New Incense'.