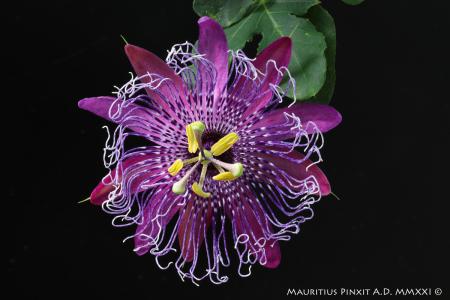 Dedicated to the Tuscan city of Lucca which hosts the prestigious event 'Murabilia'.

The appearance of this new hybrid's first flower was a surprise: a large corona, nearly 10 cm in diameter, with a bright, intense colour in which the dark violet of P. 'Fata Confetto' has merged with the red of P. kermesina.

Especially striking is the showy corona that covers the corolla without hiding it. It consists of a dense series of filaments, initially firm and straight but which curl slightly towards the ends. At the base, it has alternating mauve and purple bands that create elegant concentric circles. This embroidery gradually fades to pure white towards the apices of the filaments, adding a feature and a variant not common in passionflower flowers.

The iridescent hue of the petals' and sepals' light violet and amethyst shines through the dense network of filaments, which also allow a glimpse of this pattern to complete the beauty of the flower.

The plant began its flowering when very young, growing new shoots dense with buds. It is lively and generous, with flowers of a richness rarely seen in this genus.

In such a small specimen, it is unusual to see multiple large, colourful flowers in the morning, contrasting with the pale green of the foliage.

The mother, P. 'Fata Confetto' has survived the harsh winters in the Po Valley, thus providing a guarantee of good hardiness. The father, on the other hand, is a Brazilian plant from hot areas, famous in botanical gardens all over Europe in the first decades of the last century. Later, over time, it was forgotten; traces of it were lost and it was considered extinct. It was found again thanks to the patience of two passionate collectors, Reto Gamma (Switzerland) and Frank Axel (Germany).

They consulted numerous herbaria in a number of Brazilian botanical gardens in which this species was present and noted the areas of origin of the dried material. Many places had already been completely urbanised; however, in some cases, the natural environment was still intact and the plant was found there.

In this way, they brought this beautiful species back into cultivation, allowing its use for the creation of new hybrids.

The latest among them, dedicated to the city of Lucca and the Murabilia event, is Passiflora 'La Lucchese'.